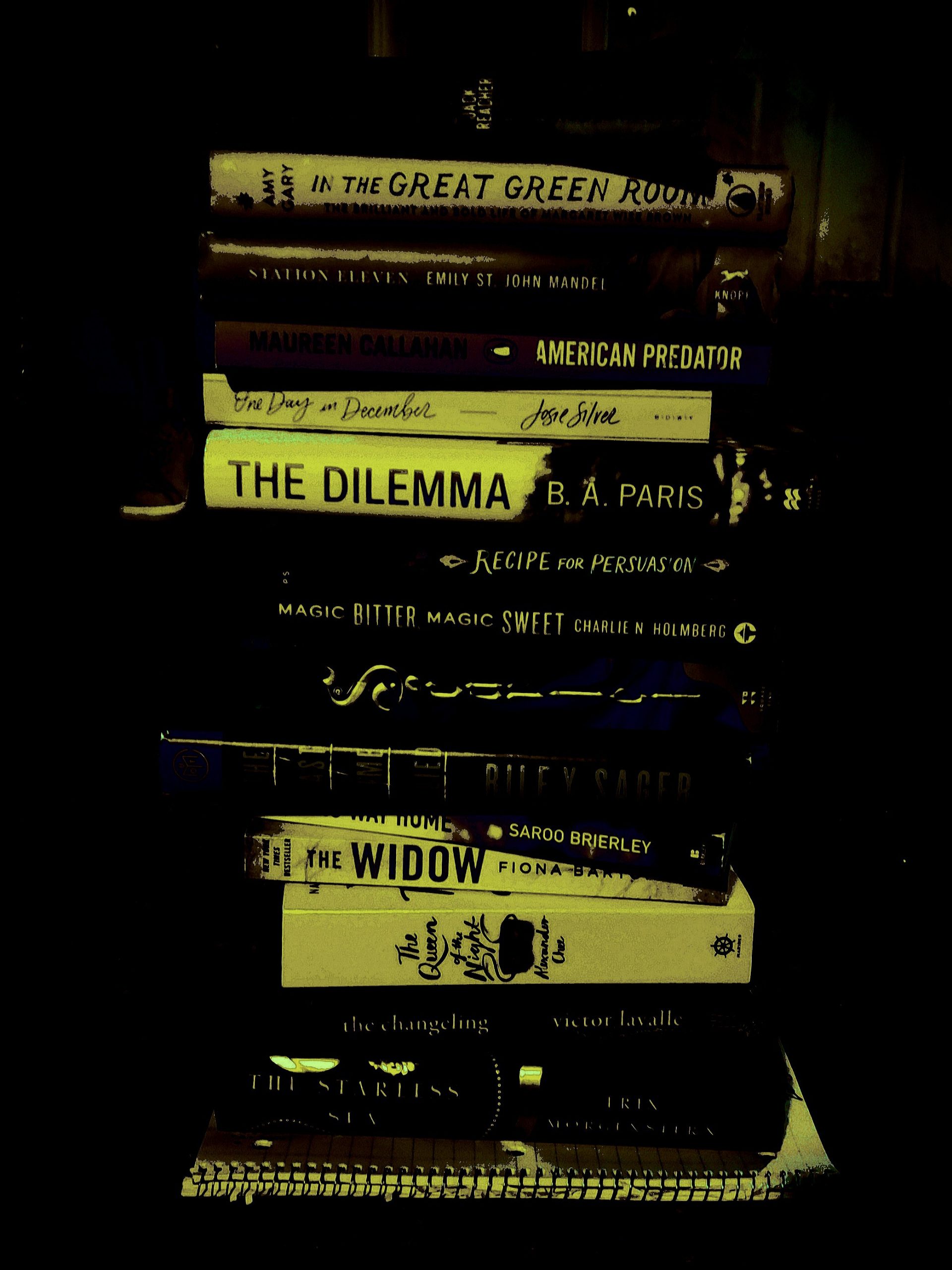 What a pretty night last night for our second month of “courtyard book club!” I hope that next month won’t be too dark or cold yet… fingers crossed.  Thanks to our newcomers for stopping by; David, Barbara and Theresa. Ross we all missed you!

Christiana read A Long Way Home by Larry Buttrose and Saroo Bierley. It is the true story of Saroo finding his way back home to his village in India after being lost as a child and adopted to Australia. So facinating! Shana is borrowing it this month.

I read one of Ashley’s books from last month, The Starless Sea by Erin Morganstern. Wow. This is probably one of my favorite books of all time. Now I feel compelled to read The Night Circus. I also read The Changeling by Victor LaValle.

Barbara is reading Ken Follet’s Pillars of the Earth, in preparation for the new prequel that he has just released.

Theresa has been re-reading some literary classics, and she just revisited Catcher in the Rye by J. D. Salinger.

Ashley read The Queen of the Night by Alexander Chee. It is 1800’s historical fiction in Paris, about an opera singer.

Mariya read a a biography, The Great Green Room: The Brilliant and Bold Life of Margaret Wise Brown. Brown was a children’s author or Goodnight Moon and others. Ashley is borrowing it this month. She also read The Dilemma by B. A. Paris, Shana’s pick from last month. And, she re-read One Day in December by Josie Silver. Several of us enjoyed that one earlier in the year, I’m excited that she has written another book.

Shana read a long ago pick by me, The Last Time I Lied by Riley Sager, and Scarlet, part of a YA series by Marissa Meyer. She enjoyed another of Ashley’s picks, Magic Bitter Magic Sweet by Charles N Holmberg, as well as Recipe for Persuasion by Sonali Dev that Mariya will borrow for next month.

Hugh read an unusual thriller, The Widow by Fiona Barton, and a collection of Jack Reacher stories by Lee Child called The Middle Name.

Dave shared his recent WWII binge of The Tattooist of Auschwitz by Heather Morris, Hitler’s First 100 Days by Peter Fritzsche, The Splendid and The Vile by Eric Larson, and Zoo Station by David Downing, as well as The Autobiography of Benjamin Franklin.

Thanks again to everyone who came out and for all the great books shared. I enjoyed getting to catch up with all of you! Hoping for great weather on November 5th 🙂