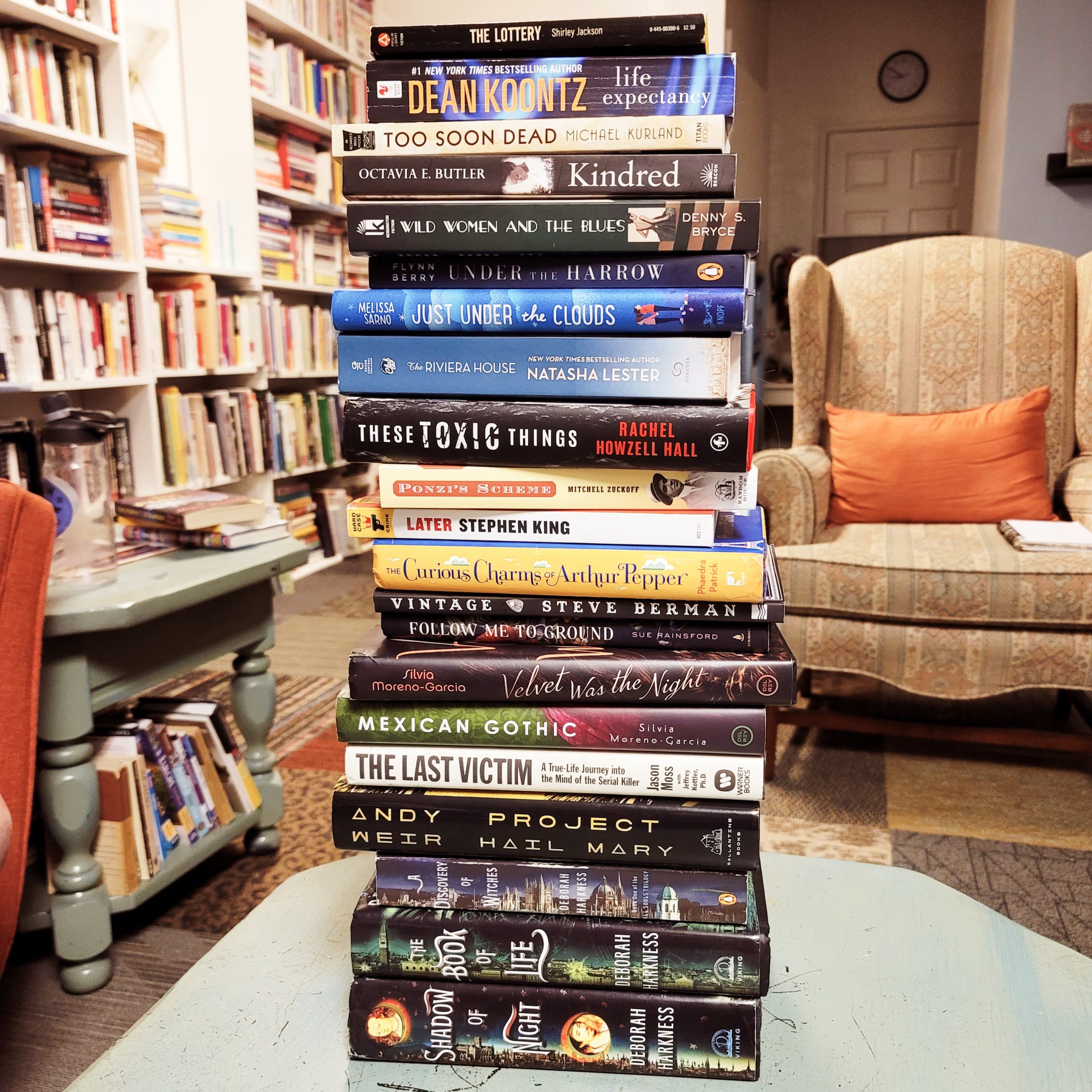 We were reminded this week that our book club has been together for over 3 years! Wow! I am so glad that each of you showed up and took a chance on something different and a little weird. I have loved getting to know you all and hearing about your favorite genres and some new experiments. You guys have made book club the best!

This month, Maria read my pick from last month, Life Expectancy by Dean Koontz. I’m so glad she enjoyed it as much as I did and I can’t wait to hear what Ross thinks next month.

Matt read Ponzi’s Scheme: The True Story of a Financial Legend, by Mitchell Zuckoff. It sounded fascinating. He also read my pick from last month, Later by Stephen King.

Ashley read Vintage by Steve Berman, and Follow Me to Ground by Sue Rainsford. Also, Velvet Was the Night by Sylvia Moreno-Garcia, which I’m borrowing this month.

Ross enjoyed The Curious Charms of Arthur Pepper by Phaedra Patrick, also read by Christiana and Shana. She told us about The Last Victim by Jason Moss. She made it halfway, but I don’t think I could attempt a book written by someone who corresponded with serial killers. Matt is made of tougher stuff, we’ll see if he makes it to the end.

Shana wins for the tallest stack. She read the next two in The Discovery of Witches Series: The Book of Life and Shadow of the Night by Deborah Harkness. She also read The Riviera House by Natasha Lester, Wild Women and the Blues by Denny S. Bryce, and regrettably, More Than Words Can Say by Robert Barklay which she does not recommend. She also read Project Hail Mary by Andy Weir after Matt and me.

Hugh read Mexican Gothic by Sylvia Moreno-Garcia, Ashley’s pick from last month that Matt is reading next. Also Too Soon Dead by Michael Kirkland, and These Toxic Things, a thriller I’m excited to read by Rachel Howzell.

I read the first of Shana’s Discovery of Witches series which Mariya is borrowing. Shana is borrowing Under the Harrow by Flynn Berry. Hugh is borrowing Kindred by Octavia Buthler and I’m so glad because it was such an unusual book. Ross is borrowing The Lottery by Shirley Jackson (already in her freezer.) Hopefully the “DTYA” Just under the Clouds by Melissa Sarno will pick her up from demons and serial killers.

Christiana, you were missed! But, I’m glad you have The Starless Sea to enjoy.

That was so much fun! I hope next month is less rainy and not too cold. I’m already looking forward to finding out what everyone is reading.