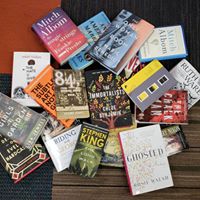 Wow, what a fun night at book club!  So many books were read in January, probably because it was the longest month EVER. Everyone had lots of books to discuss and pass around to share with the group. I am already looking forward to March to see what everyone has to say about the books they’ve borrowed!

Sasha had borrowed the 7 1/2 Deaths of Evelyn Hardcastle by Stuart Turton.  She gave up early on, but Matt is going to try to tackle it this month.  She also borrowed The American Marriage by Tayari Jones from Maria.  She loved it and Ross is borrowing it now. Sasha loved Mitch Albom’s follow up to The Five People You Meet in Heaven, The Next Person You Meet in Heaven.  I’m borrowing it this month. She also enjoyed the quick fun read of James Patterson’s Guilty Wives and is starting on Where the Crawdads Sing by Delia Owens for next bookclub.

Shana read The Girls in the Garden by Lisa Jewel, and The Only Woman in the Room by Marie Benedict.  Don is borrowing it for next month.

I read Ross’s very personal recommendation Find Me by Rosie O’Donnel as well as Secret Silent Screams by Joan Lowery Nixon borrowed from Tracey.  I also brought in The Fifteen Wonders of Daniel Green by Erica Boyce which Sasha is borrowing along with The Chalk Man by C. J. Tudor I also read The Death of Mrs. Westaway by Ruth Ware which is going home with Shana.

Don finished a book he introduced last month Riding with George: Sportsmanship and Chivalry in the Making of America’s First President by Philip G. Smucker.  He enjoyed the story telling of the authors historical journey to visit places that George Washington had visited during his lifetime.

Ashley read 84 Charing Cross Road by Helene Hanff, a collection of letters between a used bookstore owner and  one of it’s patrons, awwww! Also, Grief is a Thing With Feathers by Max Porter.  It sounds awesome and Ross is borrowing it.

Maria read Ghosted by Rosie Walsh. Several of us have enjoyed that one in the group.

Matt read and enjoyed (who wouldn’t) Mitch Albom’s The Magic Strings of Frankie Presto which has had some serious staying power in the group and has been read by almost all of us. Maria is reading it next. He also Read The Long Walk by Steven King.

Thanks again to everyone who made it out last night and continues to support this fun group!  I truly appreciate it and enjoy spending the first Thursday with all of you!