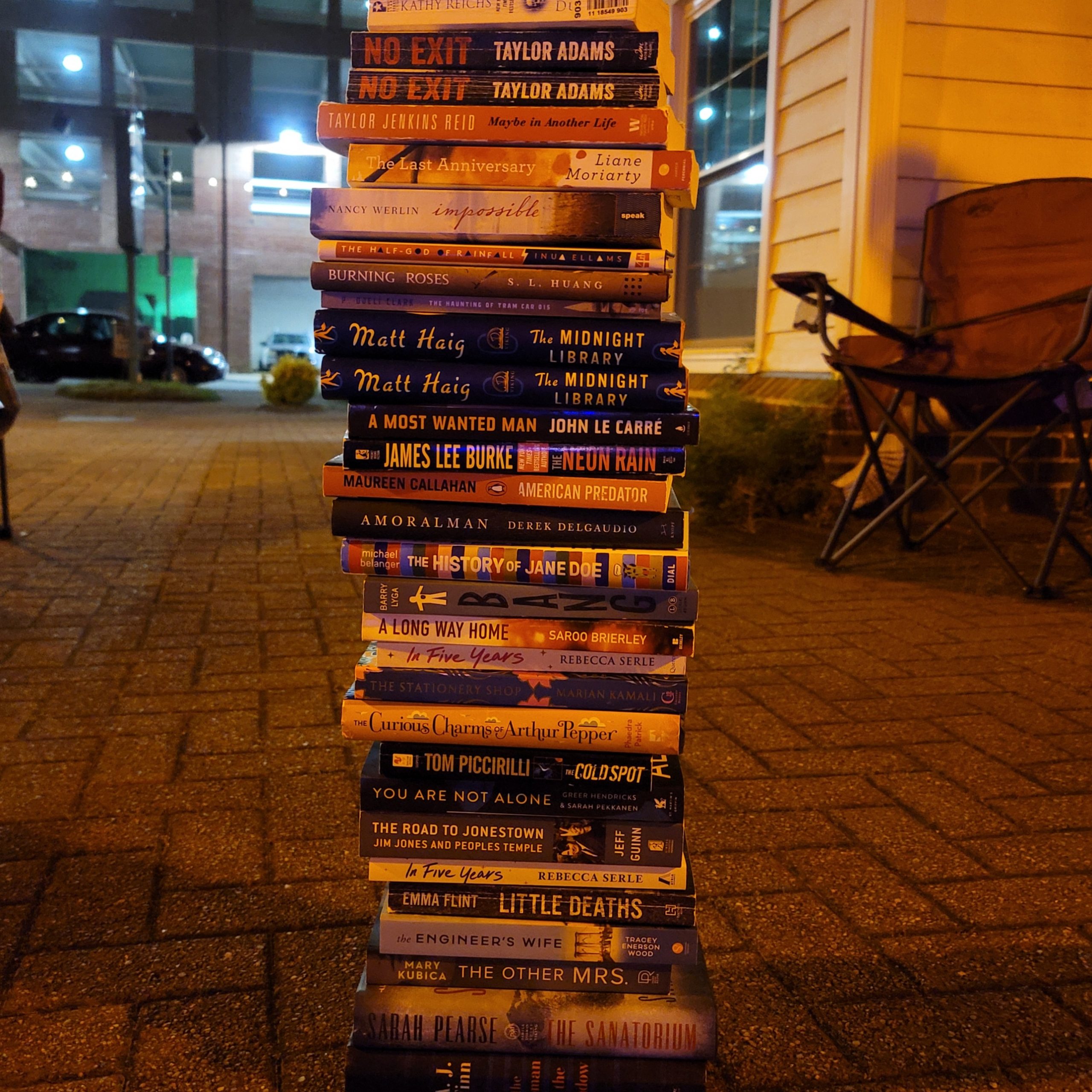 Such a fun night at book club last night! Perfect weather and great conversations. And Ross!!! We have all missed you so much. It was so good to catch up with you again. (And I’m wearing my “new” jeans today and they are perfection!)

Ross is one of the first 3 of us to read The Midnight Library by Matt Haig. (Shana is borrowing) She also read some previous monthly picks including An American Predator by Maureen Callahan, A Long Way Home by Saroo Bierley, and (the now infamous) No Exit by Taylor Adams, the first book to be eventually read by all of us. She also read Bang by Barry Lyga, AMORALMAN: A True Story and Other Lies by Derek DelGaudio (Matt is borrowing) and The History of Jane Doe by Michael Belanger (I am borrowing.)

Ashley continues to amaze me with her seemingly endless treasure trove of unusual book finds! She read Burning Roses by S.L. Huang, The Haunting of Tram Car 015 by P. Djeli Clark, (I am borrowing) and book written in verse, The Half God of Rainfall by Inua Ellams.

Christiana read The Invisible Life of Abby LaRue by V.E. Schwab and was disappointed. She also read Mariya’s pick last month Death Du Jour by Kathy Reichs, and one of my picks The Stationary Shop by Marjian Kamali. She started her “lonely old man” book theme with The Curios Charms of Arther Pepper by Phaedra Patrick (Shana is borrowing) and we both loved In Five Years by Rebeca Serle (Ross and Shana are borrowing.)

Besides The Midnight Library and In Five Years, I read Hugh’s pick from last month, Little Deaths by Emma Flint. I really enjoyed The Engineers Wife by Tracey Enerson Wood. (Shana is borrowing)  I also read The Other Mrs. by Mary Kubica, The Sanatorium by Sarah Pearse (disappointing) and The Woman in the Window by AJ Finn (ridiculous.) If anyone is interested in the full list of Daniel Mallory’s bad behavior, it is readily available on multiple news sources, but The New Yorker article has a thorough list.

Mariya read my pick from last month, You Are Not Alone by Greer Hendricks and Sarah Pekkanen. Shana is borrowing it this month.

Matt read Hugh’s pick from last month, The Cold Spot by Thomas Piccirilli. And found another good true crime book, The Road to Jonestown: Jim Jones and the People’s Temple by Jeff Guinn.

Shana took one for the team, and succummed to the peer pressure of No Exit. It is exciting that there was a book we all eventually read (tragically not very literary) prompting us to wonder if we should plan to all read something together simultaneously just for fun. I’m willing. Now, what would be the perfect book to capture all of our reading personalities? She also read Impossible by Nancy Werlin, as well as Maybe In Another Life by Taylor Jenkins Reid, and The Last Anniversary (with interesting backstory) by Liane Moriarty. Mariya is borrowing them both.

It was great to get together with everyone last night! It is always so much fun to catch up, and I can’t wait to see what everyone is reading next month. Thank you all for coming out and for making it such a fun evening. See you in June!