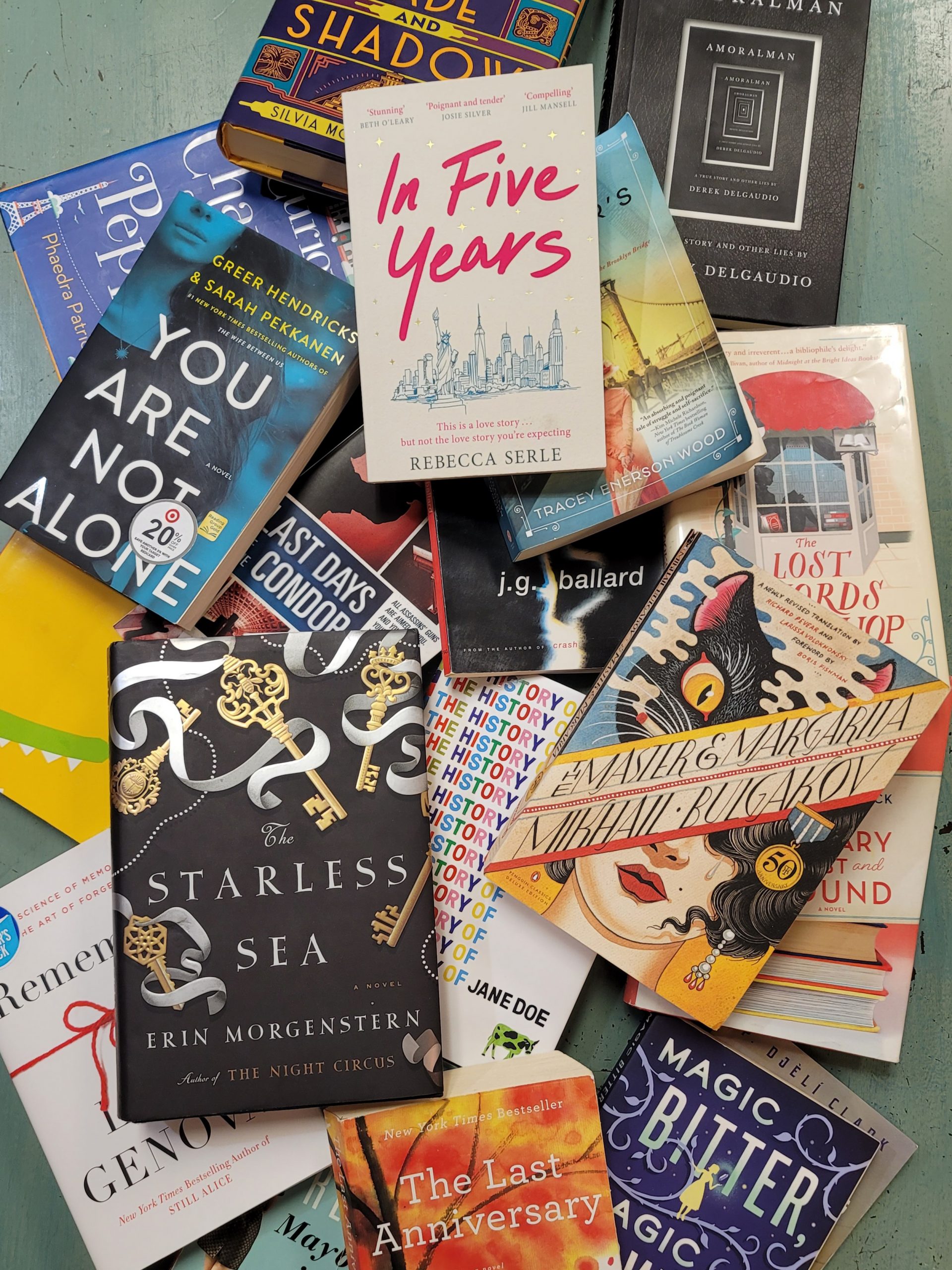 Thanks so much for coming out last night, and for being patient with last week’s reschedule. I am already feeling the pressure of 3 weeks instead of 4 to read something in my current reading slump. But it will be great to catch up again soon either way.

I read Ashley’s pick from last month, The Haunting of Tram car 015 by P. Dejeli CLark, and Ross’s pick The History of Jane Doe by Michael Belanger. I also partly read and partly listened to Lisa Genova’s non-fiction book, Remember.

Hugh read Chomp by Carl Hiaasen and Last Days of the Condor by James Grady. He also read Running Wild by J. G. Ballard. This could be the next “No Exit” I think, there’s already a waiting list of borrowers. Ashley has it this month.

Shana read my recent picks, You Are Not Alone by Greer Hendricks and Sarah Pekkanen, and The Engineer’s Wife by Tracey Enerson Wood. She also read Christiana’s choices, In Five Years by Rebecca Serle, and The Curious Charms of Arthur Pepper by Phaedra Patrick.

Ashley read Gods of Jade and Shadow by Sylvia Moreno-Garcia. We all need to start following the book podcasts where she finds these hidden gems!

Mariya read some from Shana, Maybe in Another Life by Taylor Jenkins, and The Last Anniversary by Liane Moriarty and one of Ashley’s recent picks, Magic Bitter, Magic Sweet by Charlie N. Holmberg. And, she read Erin Morganstern’s The Starless Sea, which Matt is reading next. Could this be another “No Exit” phenomenon?

Matt read Ross’s Amoralman: A True Story and Other Lies by Derek DelGaudio. And he checked A Master and Margarita by Mikhail Bulgakov off his reading list.

Christiana read The Lost for Words Bookshop by Stephanie Butland, Mariya is borrowing this month. Also, The Library of Lost and Found that Shana is borrowing to complete her Phaedra Patrick mood of charming reads.

Ross we all missed you, and I’m sorry you couldn’t make it. I promise to help you remember Beach Read next month, and how much we were both disgusted by it, and I will remember Jane Doe for a while. You didn’t warn me it was sad!

I promise to at least make a valiant effort to stop drowning my sorrows in Animal Crossing and “murder shows” long enough to read something worth sharing in three weeks. You all are awesome, and it was fantastic catching up last night as always. Until next time.