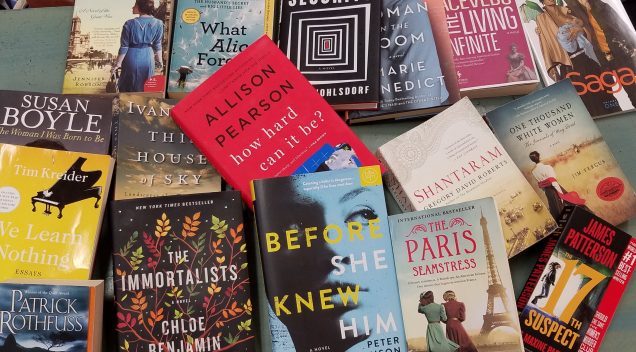 Thanks again to everyone who made it out last night even though it was the “second Thursday.” I know there’s a lot of competition for everyone’s time and it means so much that you all come out to book club as often as possible.  I’m so sorry I had to duck out early.  I didn’t want to cut our time short, or miss out on any of our conversations.  I’m hoping that I won’t have that type of conflict again, fingers crossed. Thanks so much for your understanding. And thanks Maria for the yummy treat!!

I was really looking forward to Ross’s thoughts on Shantaram by Gregory David Roberts, otherwise known as my “favorite book of all time.” I was not disappointed.  Ross, I feel so validated that this story impacted you like it did. (and don’t ever feel weird how stories relate to you personally, I love that about you, and literature should be personal to it’s readers) What’s pretty awesome is that I had told a young man at the men’s annex about this book and he just finished reading it also, and agrees it is one of the best books he has ever read. Just saying…

After a major book hangover I finally managed to finish a thriller in the 11th hour this month (thank goodness for the extra week!) Before She Knew Him by Peter Swanson was really enjoyable.  Ross is borrowing it this month.

Maria read Matt’s fantasy pick from last month, The Name of the Wind by Patrick Ruthfuss and loved it. Also How Hard Can it Be by Allison Pearson, Christiana is giving that one a try.

Matt read one of Don’s “modern westerns” by Ivan Doig, This House of Sky.  Apparently the last 40 pages were great. My favorite part of his description was, “It’s a book.” No takers on that one, sorry Don.

Shana read Liane Morriarty’s What Alice Forgot.  I’m interested to see what Maria thinks of it this month.  I may need to give it a try. She also read Somewhere in France by Jennifer Robson and the 17th Suspect by James Patterson. The Paris Seamstress by Natasha Lester sounded great. Maria is borrowing that one also.

Christiana read Ashley’s pick Security by Gina Wohlsdorf and agreed it was an amazing concept even if it might hurt your brain.

Ashley continues to amaze us all with all the off beat “strange fiction” she hunts down and bring into our awareness.  The Living Infinite by Chartel Acevedo about a 19th century Spanish princess, a comic book series called Saga, and probably the best title yet, Frankenstein in Bagdad by Ahmed Saadawi.

I shocked Ruthan by having previously read her pick this month, 1000 White Women by Jim Fergus. I was pretty sad I couldn’t hear all of her review.  Although, it seemed favorable and I really enjoy the review of books she dislikes.

Thanks again everyone for another fun night at book club. I’m sorry if it seemed cut short and I missed spending more time with you. I will make sure that isn’t an issue next time. It was great to see you all!!