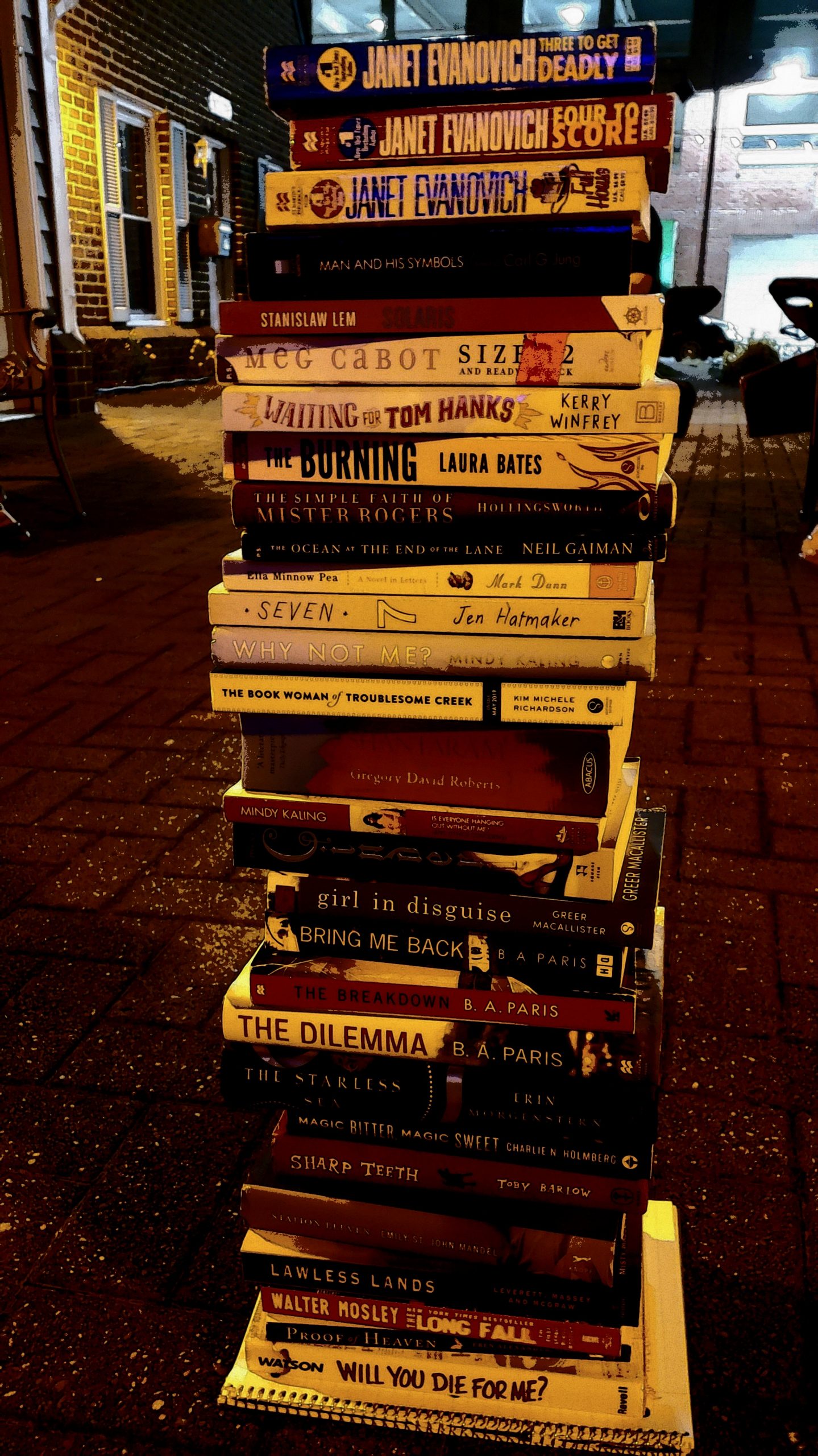 Six months of missed book clubs! I’m so glad we could all get together again last night. I think the courtyard setup worked well, until it gets really cold.  I can bring some lanterns next time or we’ll be sitting in the dark! Thanks for coming out, it was so great to see everyone again and catch up with all of you.  Here’s a selection of our quarantine reads:

I feel like Ashley definitely won for the most borrowed books this month, I still need to learn your secrets for finding books we’ve never seen, love it!! Ashley terrified herself by reading about a deadly pandemic during a deadly pandemic in Station Eleven by Emily St John Mandel. Matt is borrowing it this week, and it sounds great.  Also, Sharp Teeth by Toby Barlow, a warewolf story alternating prose and free verse, Magic Bitter Magic Sweet by Charlie M. Holmberg, borrowed my Shana, and I’m borrowing The Starless Sea by Erin Morganstern.

I struggled through a six month reading slump with unremarkable mysteries, but I got hooked on American Predator by Maureen Callahan. I can’t wait for Matt’s and Ross’s thoughts on Israel Keys. I also read The Ocean at the End of the Lane by Neil Gaiman.

Mariya enjoyed more from Janet Evanovich’s Plum Series, Three to Get Deadly and Four to Score, and Meg Cabot’s Size 12 and Ready to Rock. She also read a cute rom-com Waiting for Tom Hanks by Kerry Winfrey, and one of my picks from a few months ago, The Burning by Laura Yates.

Matt borrowed Will You Die For Me by Tex Watson, and commiserated with Ross and the gross feeling of that killers mindset. He also shared The Last Book on the Left: Stories of Murder and Mayhem from History’s Most Notorious Serial Killers based on the podcast, The Last Podcast on the Left, also by the same contributors Ben Kissel, Henry Zebrowski, and Marcus Parks. In addition he read Solaris by Stanislaw Lem and Man and His Symbols by Carl G. Jung.

Ross read Christiana’s pick, Proof of Heaven by Eben Alexander.  The quarantine reading slump is real, I feel your pain.

Shana went on a B.A. Paris binge with The Break Down (great) Bring Me Back (not great) and The Dilemma (different), borrowed by Mariya. She also read Cinder by Marissa Meyer and Girl in Disguise by Greer Macallister.

Christiana read another Janet Evanovich, Full House, Ella Minnow Pea by Mark Dunn also enjoyed by Ross and Ashley, and Shantaram by Gregory David Roberts, also read by Ross and me. She read 7: An Experimental Mutiny Against Excess by Jen Hatmaker, The Bookwoman of Troublesome Creek by Kim Michelle Richardson and two books by Mindy Kaling, Why Not Me, and Is Everyone Hanging Out Without Me? which Ross is reading for next month.

Thanks again for everyone coming out to try a new “open air” book club.  I hope we can try it again next month. See you in the courtyard!