You Become … Real – The Velveteen Rabbit 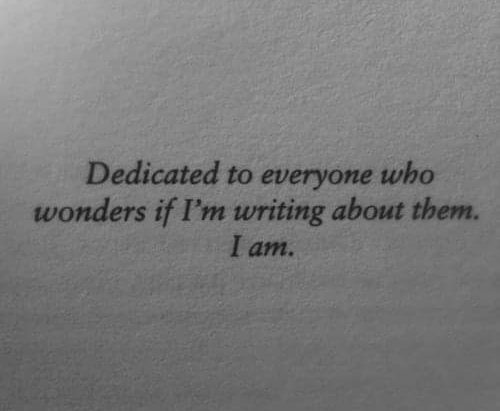 I was never the kid who knew what they wanted to be when they grew up. That’s not to say I didn’t have a plan of some kind … there was always a plan, always a “next.” But not one that stuck.  I had the blind ambition and naive assurance that I could do anything. And I tried almost anything I thought to try. Each new adventure was begun with equal enthusiasm. But for one reason or another, none of them were “the one” I had been looking for. To be fair, it’s pretty hard to find what you’re looking for when you don’t really know what that is. I still don’t know what I’m looking for, I just stopped looking and it found me.

I know that it’s found me, because I’m suddenly where I want to be. I was recently asked on unedited TV what was next, and I didn’t have an answer. I realized that for the first time I’m not living among the infinite possibilities of the next thing. Somehow I ended up here, not knowing this was where I was heading. I’ve become who I wanted to be without knowing who that was. I’m happy where I am, and who I am, and who I’m around. I’ve found my tribe. I have arrived. I belong. I have become. 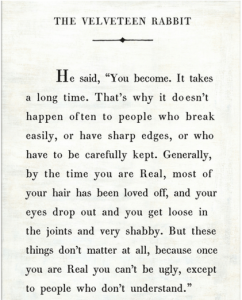 It brings to mind the Velveteen Rabbit by Margery Williams. As the Skin Horse explains, “You become. It takes a long time. That’s why it doesn’t happen often to people who break easily, or have sharp edges, or who have to be carefully kept. Generally, by the time you are Real, most of your hair has been loved off, and your eyes drop out and you get loose in the joints and very shabby. But these things don’t matter at all, because once you are Real you can’t be ugly, except to people who don’t understand.”

People become real too. Like the Velveteen Rabbit, I don’t know that any of us start off that way. We become someone real with time. My favorite people are real by this definition.  They got that way through adversity, struggle, hardship… life. They didn’t let that break them. But they also became real from love. The’re real to me because of how much I love them, and how much love they have for others. Though they are definitely well-worn, maybe some would say shabby, they’re beautiful to me. They have a story to tell. They make my world better by being in it. I don’t want sharp edges, or to be carefully kept. Real is so much better. As these special people in my life have become someone to me, I have also become someone to them.  And that’s the best feeling of belonging there is. They see past the holes where I have become unsewn and see something real inside that they find beautiful.

Real is not a thing you do. Real is a thing that happens to you. This is real.